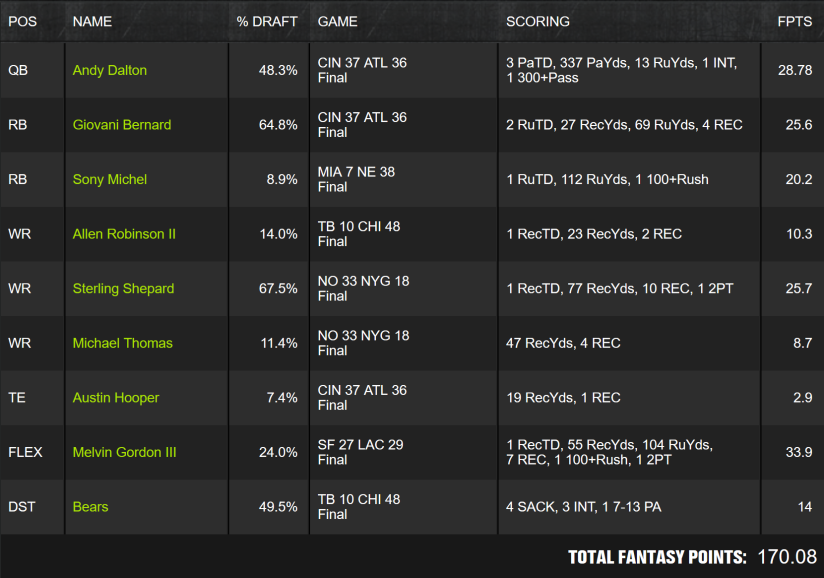 It can be easy to get frustrated playing a game that for all intents and purposes only has 17 opportunities in a year and having to wait a full week to redeem yourself when you’ve missed the mark. After week 3 I was chomping at the bit and glad to be able to get back to my normal routine in regards to research and lineup building.

The crux of this week for me turned out to be the QB/WR decision where I was stuck between Andy Dalton & Michael Thomas or Deshaun Watson and Julio Jones. My initial look of the week really liked the games for CIN/ATL and NO/NYG better than the HOU/IND game. Some recency bias of getting burned by Julio last week is what ultimately got me off that direction. I don’t feel terrible about my lineup as whole. Thomas just had a clunker. This week had a lot of high scoring, almost like week 1 so 170.08 didn’t stack up well enough.

I’m thinking that I need to weigh my $ spend on the premium priced players towards the RB’s in cash as I should have been on Kamara. The week resulted in only a 22% win rate in cash which makes 3 bad weeks in a row. Had I gone the other way at QB/WR it would have been a positive return. What this tells me is that I am on the right path and will be piecing things together the right way more often than not. As of Sunday evening I was feeling a bit tilted but this is why we manage our bankroll and don’t get too high or low as we could just as easily run of 3 winning weeks in a row when we know our research is good, or hit a jackpot in a GPP with a lineup that goes nuts.

Speaking of GPP’s, if you listened to the podcast last week you heard me tout Mitchell Trubisky as a candidate for a breakout game based on some of the deeper research I did looking at passing zones both from the player side and the defensive side. Now, I couldn’t have known he would go off the way he did, but we are playing for outcomes in a range and he lined up to be a good tournament play. I did play a couple of Trubisky lineups this week but unfortunately 1 piece of 9 doesn’t solve the puzzle and I missed some of the other homeruns this week. Next time I uncover a play like this that I know will be super low owned I will make more lineups to give myself a chance at putting it all together. Looking forward to week 5 as the tighter pricing and data gets the more our research will give us an edge.