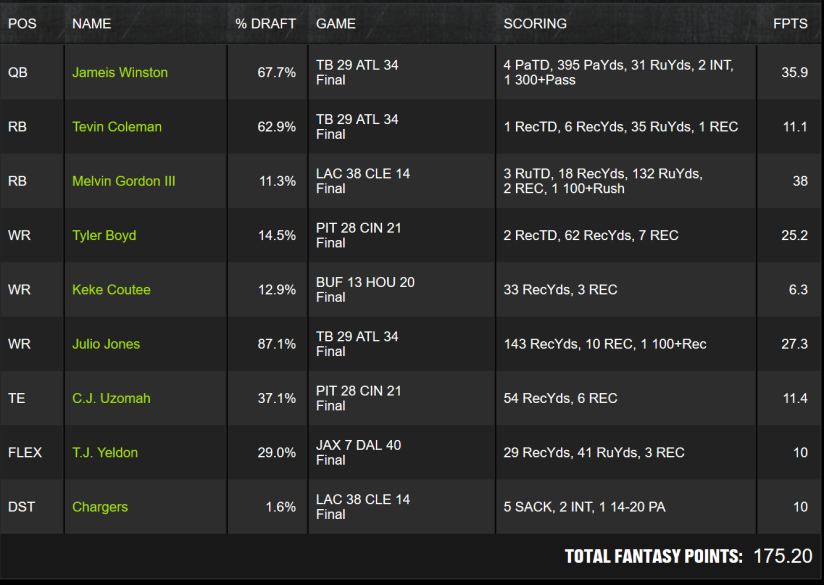 As the weeks go on, the pricing gets tighter making every decision even more crucial. Staying on top of news and doing the research will put us at an advantage over a fair amount of our opponents. When I started out my process this week I quickly zeroed in on two plays that I really liked. Julio Jones against an awful Tampa defense who is garnering a huge target share and share of air yards, whose price had dropped to $7900. Second, Jameis Winston at $5800 in a game with a huge total against an Atlanta defense that is racked with injuries. Knowing he would have to try to keep up with his own defenses deficiencies made him a no-brainer. Melvin Gordon has been very solid this year and at almost $2000 cheaper than Todd Gurley he became the high end RB that I decided to build around. I had considered McCaffrey but his touchdown equity is too low to justify at that price.

I’ve been building around three RB’s in cash so TJ Yeldon’s price and role made sense to me at $6400 and Tevin Coleman became enticing when Freeman was ruled out. These roles are not as appealing as they might look on the surface and will need to reconsider moving forward. To fit a high end WR with a high end RB I would have to spend down at TE making Uzomah the best play in my mind. Reports came out that Joe Haden would be shadowing AJ Green which really made Tyler Boyd pop to me as likely to get a lot of looks and opportunity in a game that was one of the higher totals of the slate. Keke Coutee fit in the build and I liked him based on the targets he has been getting in that offense over the last few weeks. It didn’t work out but I don’t think it was a mistake. When it comes to the defense I know everyone was targeting the Cowboys or the Bears. I didn’t want to play Dallas since I was playing Yeldon and Chicago didn’t fit. Chargers facing a rookie QB was a play I was comfortable with.

Overall, I won 26 of 30 H2Hs which was one of the better weeks so far. The process is improving and should position me well for the heart of the NFL season. Keep grinding folks!