The divisional round of the NFL playoffs is pretty much the greatest weekend of football each year. All of the top teams are in action, and each game is featured so you don’t have others drawing your focus away. Pricing on DraftKings was interesting as with many of the fantasy superstars in action they priced them affordably so that you didn’t have to make too many sacrifices when putting a lineup together. That being said, with ownerships so concentrated I pulled back from my normal volume of cash and sought out tournaments that offered both good structure and fair competition. What do I mean by that? I’ve really started focusing tournament plays on single entry or 3-max contests and only sprinkle in action on the large field, large entry when I feel good about a lineup.

First, lets quickly review the cash lineup that I did play for the full 4 game slate. Two pieces stood out to me as must plays this week. Michael Thomas in a dream spot at home against an exploitable Philly secondary, and Damien Williams who was priced down to $5100 in a bellcow role, on the most explosive offense in football. From there I looked at the QB’s and decided that Patrick Mahomes was the most sensible play. He was at home in a game with the highest projected total on the weekend.

At my second RB position and Flex I felt that with Gurley healthy he had a better chance of success than Elliot who just had a bad feeling about as Dak Prescott has been bad on the road and game script was likely to favor the Rams. As I had uncovered the week before, the Eagles give up a lot of receptions to the RB position and Kamara fits that profile nicely. While neither of these guys had ceiling games they didn’t hurt me.

With the higher priced RB’s I was not able to fit Travis Kelce in at the TE position so I settled on what I felt was the best of the punt plays in Everett. From there I simply fit what I thought would be the best ceiling plays in Cooks (a real value at sub-$6k) and then the Eagles as the low end DST who I thought had a path to sacks and turnovers.

This lineup won all of the H2H’s and the double up that I entered in. I had several tournament lineups sprinkled throughout the weekend on various slates (full, Sat only, Sun only, and Showdowns) and most were just middling with several min cashes. I did however have a Showdown lineup in the NO-PHI game that featured Mike Thomas in the captain spot that finished well. This lineup, pictured below, was good for 462nd place out of 85k in the big $800,000 featured showdown tournament.

Be sure to keep listening to the podcast through the end of the season and hear about the games as well as some hints as to what content we will be working on for the offseason. Keep grinding! 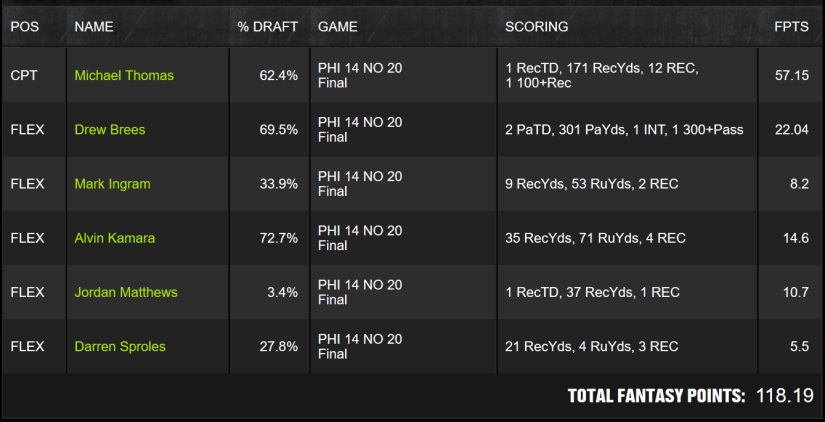